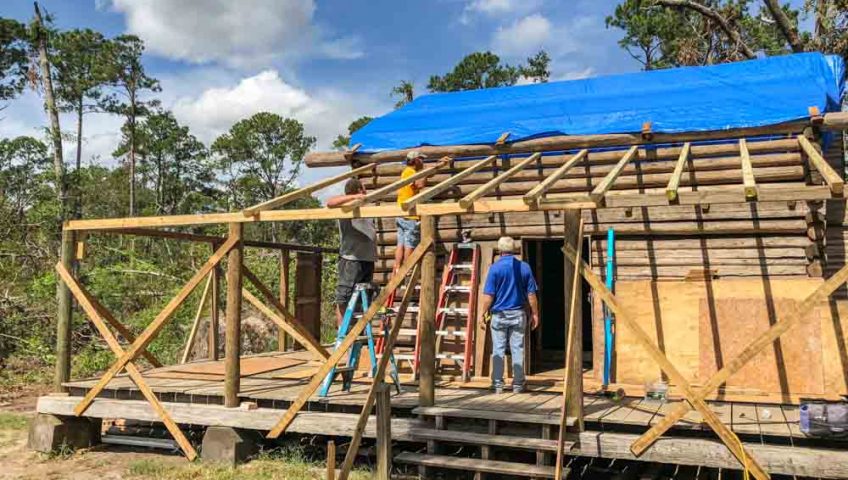 The Tilman Cabin is a small log cabin with a large wraparound porch located on the homestead site at Oatland Island Wildlife Center. On July 28th a tornado ripped through the Wildlife Center with winds up to 107mph and tore the entire roof, nearly intact, and dropped it on the ground about ten feet away.

The log rafters (circa 1970) were all shattered where they joined at the peak of the gable so all new log rafters were made and reinstalled. Some of the historic logs in the side walls had to be eased back into their original location. Historic clapboard and other pieces of the gable ends cabin walls were torn off in the tornado.

Most of the historic pieces were recovered from the adjacent wood which were now torn apart. This historic fabric was sorted, photographed and then put back together like a puzzle.

Many of the historic pieces had the original numbering from when the cabin was disassembled and brought to the site years ago. Several of the pieces were split or otherwise broken and these were carefully repaired and put back into use.

A new cedar wood shake roof was installed along with wood handrail added to the front porch for safety. The entire structure was treated with borates to prevent future insect insfestation. The cabin can continue to be used as an educational tool for generations to come. 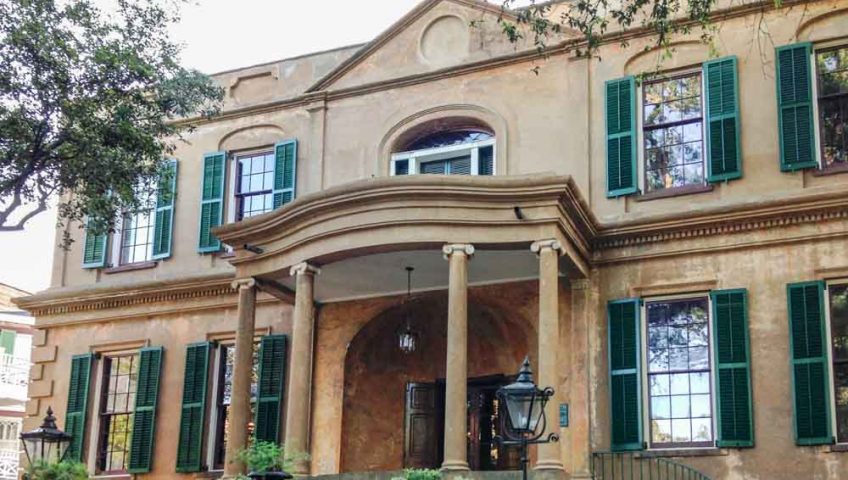 The Owens-Thomas is one of Savannah’s premier house museums. Designed by William Jay around 1816, it is considered one of the finest English Regency style houses in the United States.

Additionally, the preservation ethic used by the Telfair staff is an excellent example of the practice of conservation in historic preservation.

Because of the Telfair Museum’s dedication to the house’s preservation we have carried out a number of small projects there over the years while directing the preservation team for CHS. This work has included stucco repairs, repairs to historic shutters and other elements of the exterior.

We also had high quality replacement shutters made for thos that we could not conserver or restore. Before rehanging the shutters, we gently cleaned the entire exterior with a carefully chosen restoration cleaner and fiber bristle brushes. The exterior of the building was originally stuccoed with a naturally-hydraulic cement stucco, which is a very rare historic material.

We first dry brushed the stucco and then applied the cleaner and agitated with a brush. The mold that was marring the building’s appearance is now gone. The cleaning and the shutter repairs were almost all completed using 45′ and 60′ lifts for the safety of both the workers and the building.

The Gylliard Cottage is a small turn-of-the century structure that was soldier-housing during WWI, a drinking shack and a house. The structure has been moved several times in its life most recently to the grounds of the Tybee Island Light Station onto a temporary foundation.

A permanent location was chosen for the cottage and a new foundation was built. A 110ft crane was used to move the cottage to its new location. Once there, restoration began to the exterior including siding repairs and retrofitting the building to better withstand hurricane winds. A new standing seam roof was installed. Care was taken in removing materials from the inside and original linoleum floors were removed and samples were kept for posterity. World War II era newspapers were removed from between two layers of linoleum The papers advertised blackout curtains from Haverties and items for sale from Adler’s Department Store. The Gylliard Cottage will be used as a way to educate about Gullah culture at the museum site. 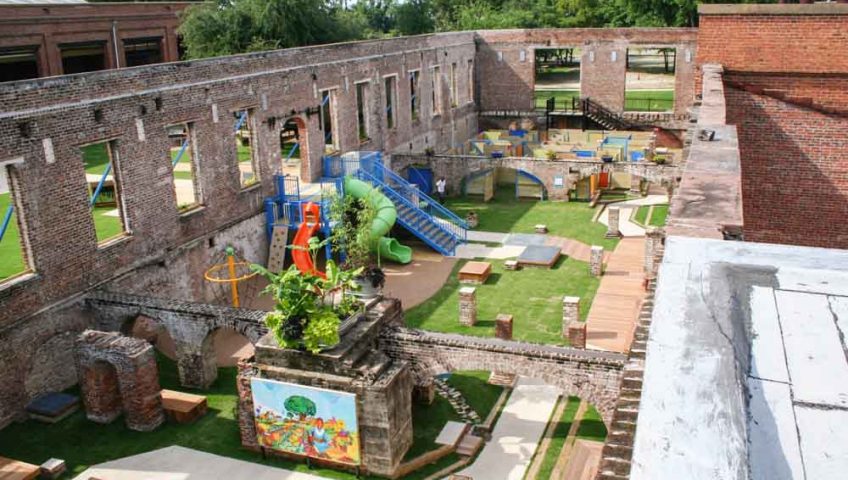 The Carpentry Shop at the former Central of Georgia Repair Shops had terrible luck with fires over the years. It burned to the ground in 1923 and was rebuilt in less than a year by the Central of Georgia. The building was restored in the 1970’s but burned again leaving only a shell. The shell was overgrown for years and when the adjacent property was acquired the idea for using the shell as the first phase of a Savannah Children’s Museum was born. As curator of buildings for the Coastal Heritage Society Stewart managed the CHS Design Team that designed the space and all the exhibits.  He also managed the engineers and architects responsible for the structural, electrical and life-safety designs and the CHS preservation staff and subcontractors that made it all happen.

The walls of the Carpentry shop had all been compromised by the fire and years of exposure to the elements. Restoring the masonry and cleaning up the site was the first priority. Many of the arches were damaged and required rebuilding and restoration. Preserving elements like the historic foundation for the Carpentry Shop planer and the lower level masonry columns and turning those into central features of the museum (a huge pedestal for plants and trees, and the uprights that make the structure of the children’s maze)  are important to the Children’s museum and also important for the long term preservation the Carpentry Shop since it is still part of a National Landmark site.